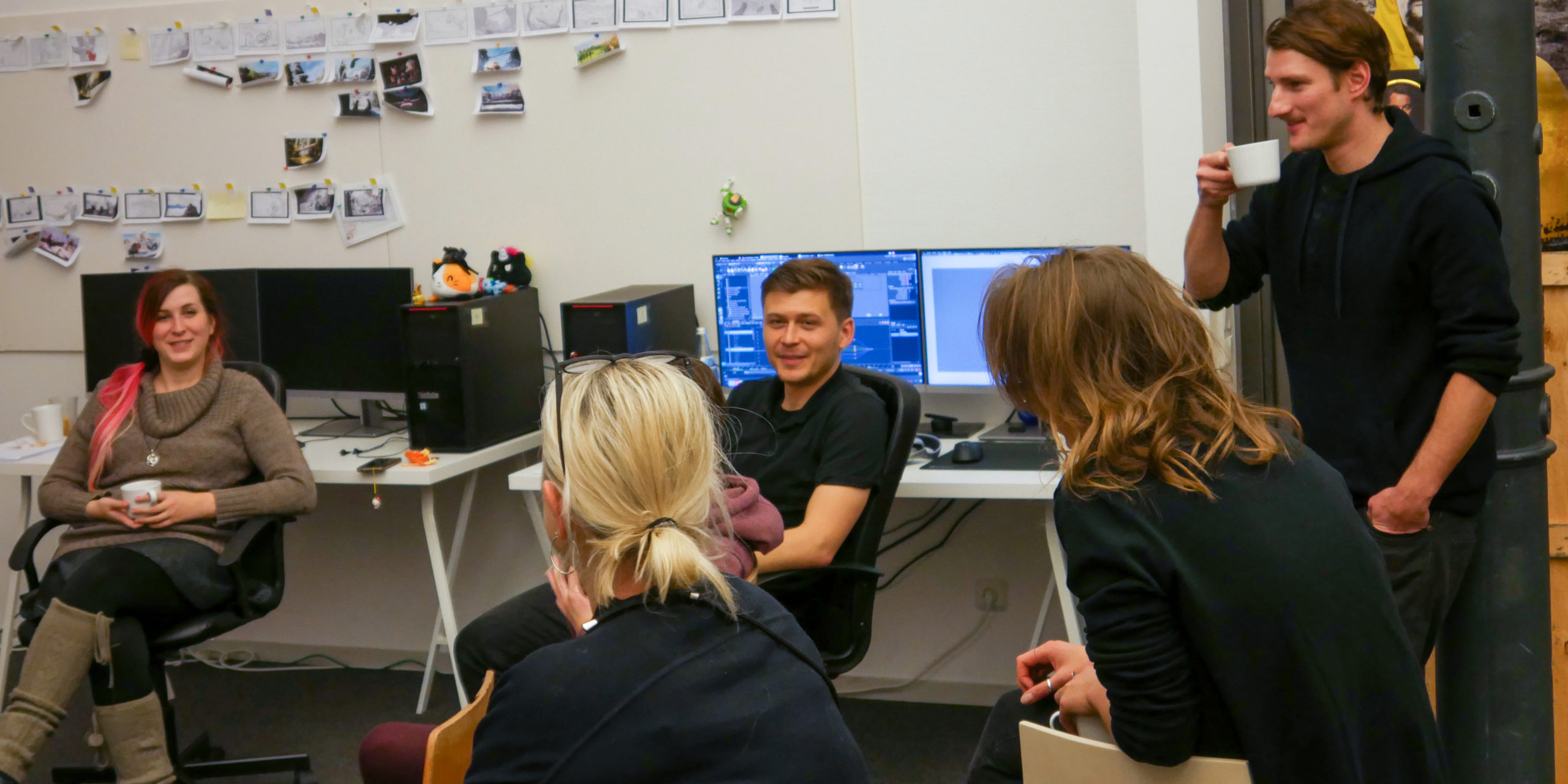 The good news first – animation production is enjoying good health, there are barely any reports on production stops, postponements or cancellations. This is quite different from the situation of its filmic siblings: live action, documentary, daily soap, and series formats are momentarily hard struck and laid low. Those colleagues who can continue to produce are being looked at with some envy by others. In times of social distance, however, they no longer share an office or a studio but are relocated to home offices, where they can carry on working via pipeline access on their computers. Thanks to Zoom, Skype, Team etc. conferences and meetings can be conducted online. So what has changed, apart from it no longer being possible to quickly and unofficially solve questions and problems with one’s colleagues? “Processes take longer”, producers say. Besides, online meetings are perceived as being arduous, and in front of the screen attention spans seem to be shorter as in face-to-face meetings. To deal with this new form of meeting culture is a learning process. It is amazing how much can be done digitally, but we also realise why the personal and human factors are so important in our creative industry. The film industry is a people‘s business.

And here the news that are not so good. Naturally, animation production has difficulties to grapple with, too. “Financing is presently getting harder”, so we hear from the industry. Money is getting scarcer; decision processes are slowing down. Important financing partners such as cinema distributors do not know when their next film release will take place, campaigns are on hold. Not a good time to invest in new projects. Some broadcasters have similar reservations; while currently seeing record ratings, they are struggling with dwindling advertising revenues. Film funding institutions continue to work, but during and after the crisis funds might have to be distributed differently, as a safety net for the film industry. For that matter: in Germany, animation has been somewhat neglected with regard to funding so far. Proportionally, less funding goes to the development and production of animated films, although they are a German export success. It is doubtful if more money will be available for them after the crisis. Also, even before COVID-19 has the film industry been part of a global, digital paradigm shift and in the beginnings of a phase of consolidation. Now, the virus serves to accelerate matters further. What will our sales markets look like after the crisis has been overcome? Will the reception of films change? Will audiences return to the cinemas; will the increased, record-breaking film consumption on streaming platforms persist? Word about the – at first glance – apparent well-being of the animation industry gets around, so that the WGA – Writers Guild of America has recently advised its members to switch to animation, as colleagues there were not as badly affected by the crisis. Apart from a lack of collegiality, this call also indicates a high level of ignorance while being reminiscent of modern-day robber barons. The hubris of believing that any screenwriter could, per se, write good animation plots is appallingly arrogant. With feverish panic, people turn to where no shutdown is apparent. One wonders how long the WGA assumes productions are stopped for if they give their members such strange advice. “Take animation scripts instead of chlorine bleach against corona and in a few years, you’ll be healed”?

The right approach would be to cope with the crisis together and resolve past antagonisms. Perhaps the moment has come to explore new business segments and possibilities of closer cooperation between live action and animation. Because in the end, we are all united in our love for good stories and the medium of film.

Photo: Meetings in the studio in times before Corona
© Eagle Eye Studio