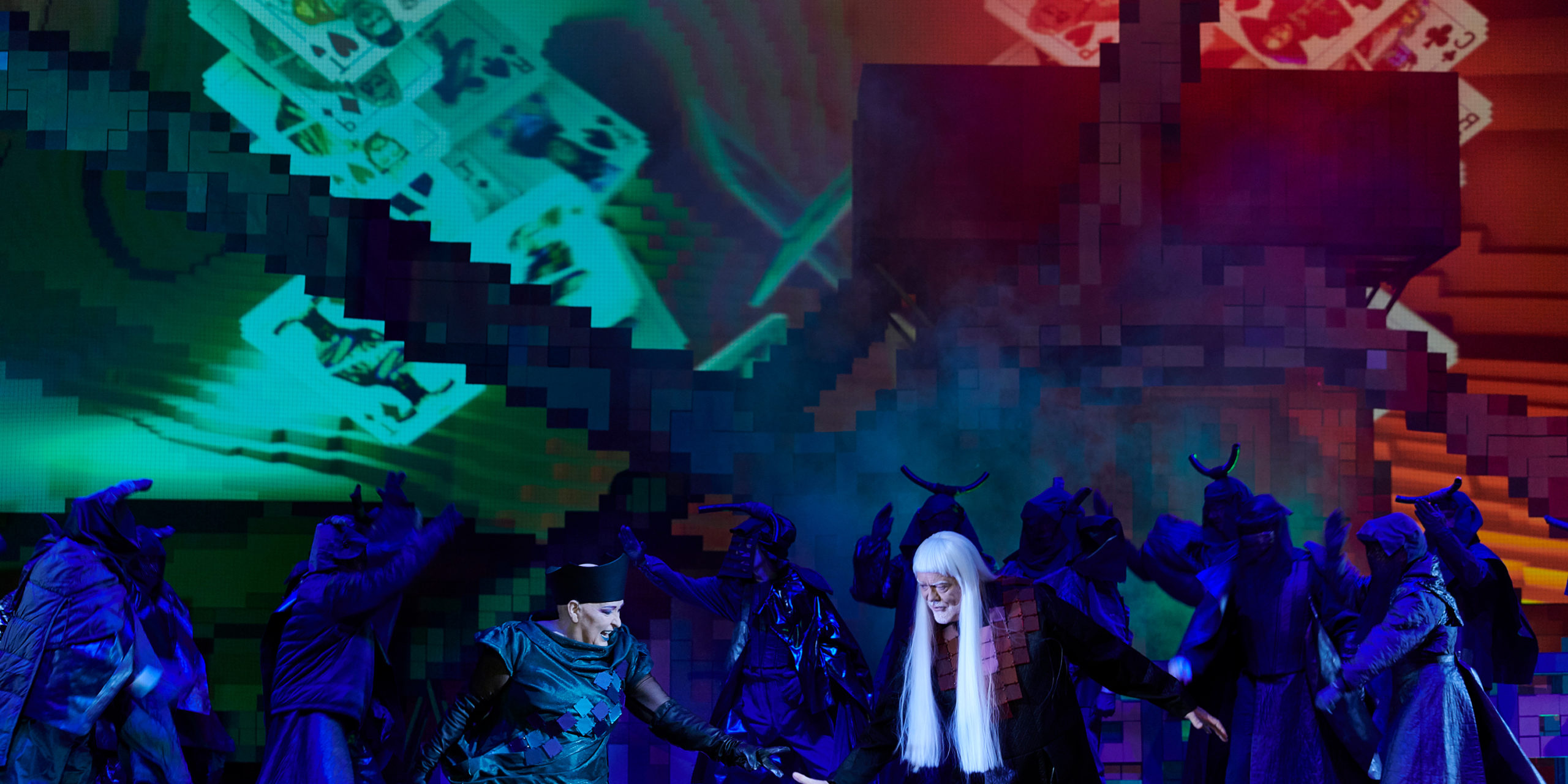 Opera & Animation – A Declaration of Love

Opera and animation – a royal wedding of bastards, the intersection of a high degree of stylisation and emotional truthfulness. Both art forms take a multi-eyed look at inner reality, avail themselves of various art genres with relish, and create a multi-perspective by layering space, form, sound, motion, and time, exposing the nature of the unspeakable.

Kim Thompson’s Monty Pythonesque “All the Great Operas (in 10 Minutes)” tightens and intensifies, laconically and statistically, 11 opera plots, recounting stories of adultery, incest, and suicide in 10 minutes – with a total of 38 deaths. By skilful omission, she reveals the true essence of opera and animation: excessive, stirring embellishment when the plot pauses, when the narrative chain makes a temporal detour in linking cause and effect. To put it plainly: an aria is called for.

While artificial animation characters lack a singing voice of their own by nature, opera and animation are still similarly arialike. By exiting the real-time plot, principles of objective reality are overthrown. There are no natural laws for emotion, the arrangement of musical notation, or the sequence of film frames. All is open for metamorphosis and manipulation. Thus, the voice content is conveyed by deformation, by phonetic and physical gestures and the dissolution of boundaries. In Martin Arnold‘s “Alone: Life Wastes Andy Hardy“, Judy Garland’s singing voice dilates, frame by frame, to the point of turning into a protolanguage of emotion and the subconscious, accompanied by physical stuttering and lurching. In “Aria”, Piotr Sapegin carries this body language forward to the point of self-dissolution of his puppet character “Madame Butterfly”. With a high level of drama, his tragic heroine tears herself open through layers of fabric, cotton wool, and wire, all the way to her puppet skeleton. The soul becomes visible not as a thing, but in the performance of her gesticulation to the music of Giacomo Puccini. Manipulation of time and physicality – two top disciplines. In opera. In animation.

Animation is used to create complete worlds out of nothing: drawn, digitally, or as a miniature set. Like this, it also expands opera stages in animated film and in the opera hall. Space created in this way can transform in seconds. It affects characters, reacts to them, becomes the outside to their inside, or turns into an actor itself. From time to time, social or political reality eats through the cocoon of artificiality, thus using it for the articulation of unspeakable brutality such as Lewis Klahr has done. In Erich Wolfgang Korngold‘s “Mariettas Lied“, by means of reduced animation, it contrasts photographic backdrops and flat figures with an unsettling piece about Jewish composers fleeing the Holocaust.

Today’s technical possibilities of video mapping, however, allow for precise interplay on real opera stages. The human ensemble interacts with artificial characters, the stage is overdrawn virtually and turns into a projection screen for moving, graphic visualisations of sound and emotion, while animation slips seamlessly into the roles of effects, architecture, design, costume, and character. Suzanne Andrade and Paul Barritt aka 1927, for instance, creatively transfer artistic eclecticism of the 1920s to “The Magic Flute”.

With regard to title and origin, Keiichiro Shibuya’s “The End – The Vocaloid Opera“ makes an almost prophetic claim: After almost exactly 400 years of opera history and the cemented consent between stage and audience to use artificiality as a key to a different reality, this fully computer-generated opera from 2012 apparently disposes of everything human by means of animation. The protagonist, ‘Vocaloide’ Miku Hatsune, is just a digital code. Neither touchable such as a puppet character or a drawing, nor a substitute for an existing human voice. Emotion in pure form and without gravity – the total fusion of opera and animation. But in the end, it is human-made.

Since 2016, ITFS and the Stuttgart Opera have been building bridges between opera and animation together. The success of this cooperation is no coincidence, as animation is of increasing importance to the Stuttgart opera house.

In 2015, Anna Matysik created a short film on the internationality of the Stuttgart Opera ensemble, titled “The Flying Opera House”. For this, she used the trio “Soave sia il vento” from Mozart’s opera “Cosi fan tutte”. In 2017, the Stuttgart Opera cooperated in the production of the short film “Death of a Fruit Fly”. The film team drew inspiration from a choreography in the opera “Orpheus in the Underworld”. Daniel Kluge lent his melodious voice to the eponymous fruit fly. For the premiere of its new production of “Don Pasquale“ on March 25, 2018, the Stuttgart Opera created a six-minute animated film together with Ludwigsburg Studio Seufz, which is part of the opera performance and, to the overture, shows the protagonist’s life so far. Costume designer Teresa Vergho collaborated closely with Studio Seufz on this project, with the animation aesthetically quoting from 1970s art movements. Further cooperation took place with Ludwigsburg students and graduates.

Mutual workshops – in 2017 with British animation and stage artist Paul Barritt, and in 2018 with other animation artists – as well as the live screening of the opera “Rigoletto“ on Schlossplatz as a special in connection with an ITFS Festival Focus, are top examples for the productive interaction in order to win over audiences as well as artists for the linking of two art forms. Thus, the partnership between the Stuttgart Opera and the ITFS with its Opera & Animation programme section is prepared to continue being a love story come true.